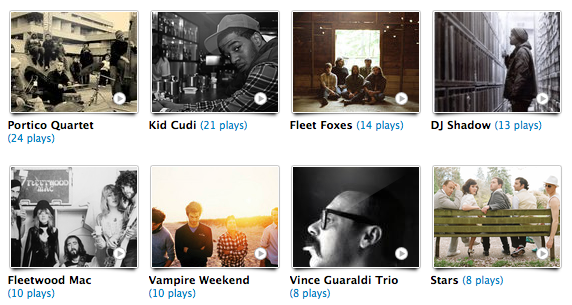 I stole this idea from a friend’s blog… Anyway this is what I’ve been listening to recently.

This is a great jazz band from London, featuring the almighty hang. I discovered them through a random picture I found on flickr a couple years ago. It showed the band busking on the streets of Paris (something I think they do fairly regularly).  I was intrigued, and from there I found some videos and eventually downloaded their first album. Knee-Deep in the North Sea came out in 2007, and is a great album, as is Isla, their 2009 follow-up. Knee-Deep is more straight ahead modern jazz with a minimalist classical twist, while Isla builds their sound into is a meditative blend of jazz and classical elements that sounds almost psychedelic at times. Both are worth checking out for sure, especially if you like the hang.

Cudi’s Man on the Moon: The End of Day (2009) has been one of my go-to albums for the past couple weeks. Sci-fi Stoner Trip/Hip-Hop. Every song is just so chill and cool. My favorites are “Enter Galactic (Love Connection Part I),” “Pursuit of Happiness” (which has an awesome video, below), and the last two tracks, “Hyyerr,” and “Up Up and Away (The Wake and Bake Song).”

These guys just might be my new favorite band. I can’t even say what songs I like best because I love everything I’ve heard so far. Their 2008 self-titled full-length debut is amazing, and so is their EP, Sun Giant (also 2008). Their 2006 Fleet Foxes EP is good too, but I haven’t listened to that as much yet as the others. Apparently they have a new album in the works as well, and I can’t wait to get my hands on that.

This is a beautiful live music video of Fleet Foxes playing in Paris, first in a park and then in an abandoned building. The first song is “Sun Giant” from the album of the same name, and the second is “Blue Ridge Mountains” from Fleet Foxes.

Downloaded Endtroducing a few weeks ago and have really been getting into it. One of the first Trip-Hop albums, and still one of the best I’ve heard. A classic.