I’ve been wanting to get some practice with French sauces, and yesterday, with a log of nice chèvre aux fines herbes in the fridge and a pot of freshly grown tarragon upstairs (courtesy of Jerico), I knew I had the makings for something good. I decided to pair a creamy goat cheese sauce with mushroom ravioli. My original thought was to make ravioli, but that wasn’t in the cards for that night. I ended up using Buitoni Wild Mushroom Agnolotti, and although I kind of doubt their portabello and cremini mushrooms are actually wild, they were delicious and worked really well with the goat cheese and tarragon.

I found inspiration for this recipe here, here, and here. It sounds fancy but is really pretty easy to make! You will need:

Prepare pasta according to package directions. While the water boils and the pasta cooks, make the sauce. It begins with a simple roux: melt the butter in a skillet with the olive oil, and saute the shallot and garlic for about five minutes. Add the flour and whisk until combined. Then, add the milk, continuing to whisk to prevent it from scalding. Cook for another five minutes, remove from the heat and add the goat cheese, mustard and tarragon.  Whisk until the cheese is totally incorporated and season to taste with salt and pepper. Plate the cooked and drained pasta, top with sauce, and garnish with a sprig of tarragon.

Here is the recipe to an amazing breakfast I’ve been eating a lot lately. It is good. So good.

Bring the water, coconut, and a pinch of salt to the boil. When it is boiling add the oats, a dash each of cinnamon, cardamom, and allspice, the honey or molasses, and a pinch of dark brown sugar to your taste. Cook uncovered, stirring occasionally, until the oats are soft and the mixture has thickened (about five minutes). Remove from the heat and add the chopped nuts (I used walnuts) and the berries of your choice (I chose blackberries and strawberries). Drizzle with a bit of honey or maple syrup and enjoy.

Rather than cutting berries beforehand, I just put them in whole and cut them with my spoon. This way any juice that spills is added to the oatmeal. If you don’t feel like cooking, a different but equally good result can be obtained by adding all of the same toppings to a bowl of grape nuts and milk. I’ve also made oatmeal with mango by substituting some of the water for coconut milk and using chopped mango instead of berries. That was good too. You might also add some finely diced ginger. 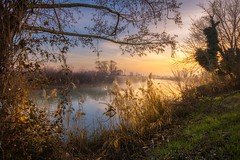